Text Size
A A A

Gift Options
Ways to Give

Matters of the Heart with Linda and George Callard

Linda and George Callard have been friends of ERS for over 30 years. Their Episcopal connections in Hyde Park led Linda to become involved as a volunteer for decades which included a stint on the board. Through the years, they have been loyal, generous donors. They have visited countless friends who have become residents. They have recovered from illness and/or injury in our short-term rehab and now they call ERS home. 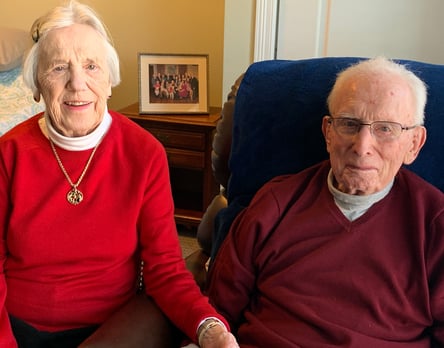 Their love story began 60 years ago. Linda, a newly graduated nurse from rural Ironton, Ohio, hopped on a train to Baltimore to start her career. There, she met George, who was there to attend medical school and complete his residency at Johns Hopkins Medical Center. The rest, as they say, is history and a history that is worth sharing.

As luck would have it for all of us in Cincinnati, George accepted a position 50 years ago with Christ Hospital, which was launching a cardiac surgery department. George was exceptionally dedicated to his career, regularly working 15+ hour days. With her own medical background, Linda understood the demands of his career and supported his success by devoting herself fully to raising their beautiful family. Together they had six children who have grown to include spouses and ten grandchildren.

Like all relationships that this long do, Linda and George have weathered their share of life’s joys and tragedies, including the loss of an infant son, Tommy, ironically due to heart problems. Perhaps this painful loss fueled George’s drive to become an exceptional cardiac surgeon and Linda’s full support of this calling.

Through thick and thin, Linda joking shares that there was one moment that was nearly the straw that broke the camel’s back in their marriage…the day George “surprised” Linda with a new puppy-a Bernese mountain dog, nonetheless! Fortunately, Linda quickly fell in love with the pup, which got George out of the doghouse!

A tragic accident in 2013 changed the course of their lives and brought them even closer together when George suffered a terrible fall. After devoting her life to raising their children, Linda prioritized caring for George. Several years later, Linda suffered a fall of her own and spent nine weeks in rehab at ERS’ Marjorie P. Lee community. Just before the onset of COVID, Linda moved into The Deupree House, followed by George, who moved into the Cottages. 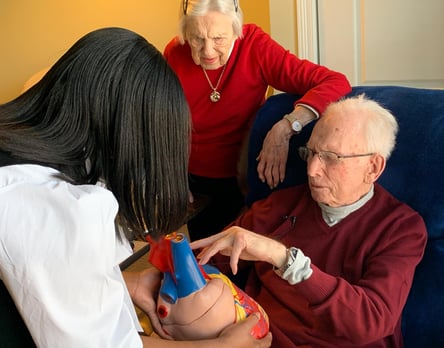 In her efforts to make George comfortable in his new home, Resident Coordinator DD Farmer dropped by his room one day to ask what she could do to help him. He expressed concern that he couldn’t remember things like he used to. A few days later, DD showed up with a large anatomical model of the human heart. Always the teacher, George, identified all the parts of the heart and explained their functions to DD.

Linda visits George daily. In honor of Valentine’s Day, when asked to describe his wife, George responded, “She is a lovely person. I love her deeply. I am lucky to have her.”

The love they share for one another, their family and friends, and for serving the needs of ERS as volunteers and donors is an inspiration to all who know them. Throughout his career as a cardiac surgeon, George saved countless lives which, in turn, prevented many broken hearts. By all accounts, Linda and George are experts in matters of the heart.

Linkage Online - A Blog by ERS